One of the hardest things to swallow in life is the realization of your own limitations. There are just certain things that we cannot do very well or at all. What makes it such a defeat is that we are told throughout our lives that we can be anything we desire, only to find out later that this is untrue. It is hard not to be disappointed that I cannot be a rock star, tight-end for the Packers, or a double-naught spy (think 007).
I can't help but wonder that by filling kids with the notion that they can be anything they  set their minds to be, that we aren't crippling them emotionally. Since our potential, by definition,  is something that is never realized, otherwise it wouldn't be 'potential', but 'actual', aren't we then relying on becoming a version of ourselves that we can never truly bring into being? I think of the entertaining crazies that somehow make it onto 'American Idol', that screech out a version of 'pokerface' or whatever, only to be absolutely crushed that they aren't the next Justin Bieberlake. Somewhere along the way you'd think a loved-one would have slapped them to one knee and told them to rethink their future? But I digress.
Somewhere in our lives there needs to be balance.
Malcolm Gladwell wrote about this a few years ago when we compared the grades of kids in advanced placement classes. The brightest ones weren't necessarily the ones with the best grades, but the group of kids with the best WORK ETHIC. The ones that spent hours more on homework, possibly because they were told that they were smart, but that smarts alone just doesn't cut it.
Lessons Learned
As a kid, all I wanted to do was play football. The summer before my senior year I work hard enough to win the top award for being in the best shape before the season. I ran with the defensive coach, never missed a weight session, and even ran pass plays with quarterback, something no one else was doing back then. I was a receiver on offense, a linebacker on defense, played special teams and snapped the ball on punts and extra points-I never left the field, and then I got hurt. I thought all of that prep was wasted.
I was wrong of course. Learning how to prepare yourself, to work hard, give everything you do your absolute best is biggest lesson I ever learned. As a karate student, I wanted to kick like Bill 'Superfoot' Wallace, and so my instructor told me to train like he does - do 1000 kicks per day. I thought he was kidding. I mean Wallace is a natural, why would he have to work so hard at it? 'How do you think he got that way?'
Preparation & Opportunity
Whatever it is that you do, or want to do, commit to hard work. The more work and preparation you put into your life the more you will come to understand your gifts, and limits. You will have tremendous talent in certain things, and be flat-out awful at others, so dump the bad, and focus on the good. Set your mind to making the good into great, and the great into the best. Potential is fine and necessary to get started, but it is the stuff of high school guidance counselors, and late-night infomercial hucksters who will make your dreams come true with no money down and 'only in your spare time'. To be prepared for one of those opportunities that come into your life prepare yourself with a single-mindedness only seen in a champion.
The World Needs You!
You have been given a unique set of gifts, skills and shortcomings, how you use them is your choice, and so choose wisely. A young boy came up to me and told me that he was working out 6 days a week to make his martial arts better. Is there any doubt in your mind that this kid is going to succeed?
Posted by SenseiCJ at 7:35 AM No comments:

A few years ago I earned a degree through Tom Callos' Ultimate Black Belt Test. It was a test that took two years and involved a lot of different requirements - some necessary, some not so. It was a great experience. It changed the way I looked at Black Belt testing in some ways and re-affirmed it in others.

There is one thing that has remained constant though, I could care less how many bars I have on my belt. The rank does not make the black belt. In 1985, I moved to Madison, Wisconsin, with my instructor Randy Reid to start the first Karate America. We grew quickly, adding schools throughout the state, and some fellas even moving to Florida and Colorado.

As time passed, we started getting all of these black belts, and we had to figure out what to do with them all, and so we started developing a 2nd degree program, which led to a third degree, and then on to a fourth, and for a few - a fifth degree.

One of the unintended consequences of adding degrees to our black belts is that some of them fell into the trap of believing that the person wearing a 3rd degree is morally superior than than the once with a 2nd degree, and so they base their self-worth on how many gold bars they have on their belt.

So you had a cultural hierarchy develop where some thought they were better than others simply by the rank achieved, with no regard to experience, potential or ability. It was kind of like Animal Farm, where everyone is equal, except some are more equal than others. I hated that. 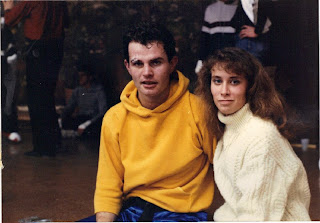 "IT is not what you wear it is what you do."

It is not what you wear that makes you what you are, but rather  it is the experiences that you endure that make the degrees on your belt bearable. Personally, I have done more than some, but far less than others, but that's okay, I still have time.

Be true to yourself.

"Stay thirsty my friends."
Posted by SenseiCJ at 3:24 PM No comments:

6. Successful Instructors are enthusiastic
They are always in a positive mood - even during difficult times - and their enthusiasm is contagious. They seldom talk poorly of their school or        business. When faced with unpleasant or negative situations, they choose to focus on the positive elements instead of allowing themselves to be dragged down. Remember, enthusiasm is not taught, it’s caught!
7. Successful Instructors take responsibility for their results
They do not blame internal problems, the economy, tough competitors, or anything else if they fail to meet their goals. They know that their actions alone will determine their results and they do what is necessary.

8. Successful Instructors work hard
Most people want to be successful but they aren’t prepared to work hard to achieve it. Superstar Instructors don’t wait for students to come to them; they go after them. They usually start work earlier than their colleagues and stay later than everyone else. They make more calls, prospect more consistently, talk to more people, and teach more classes. Successful instructors do what unsuccessful instructors won’t do; they do “Whatever it takes”.
9. Successful Instructors keep in touch with their students
They know that constant contact helps keep students so they use a variety of approaches to accomplish this. They send thank-you, birthday, and              anniversary cards. They make phone calls and schedule regular ‘progress reviews’. They are constantly on the lookout for new and creative ways to keep their name in their students’ minds. They work 110% with students to help them progress their martial arts skills, achieve their individual goals and ensure they have an enjoyable time.
10. Successful Instructors show value
Today’s world is more competitive than ever before and most        Instructors think that price is the only motivating buying factor. Successful Instructors recognize that price is a factor but it is seldom the primary reason someone chooses their school. They know that a well-informed buyer will usually base much of her decision on the value proposition presented by the Instructor. They know how to create this value with each student, they encounter.
Posted by SenseiCJ at 3:21 PM No comments:

Posted by SenseiCJ at 6:05 PM No comments:

Posted by SenseiCJ at 4:04 PM No comments:

4 Things Every Karate Instructor Should Know

1. It is not necessarily about teaching martial arts, but developing relationships.

2. It is not necessarily about your style, the 'what', but about your settings expectations, the 'why', and holding your students accountable, 'the how'.

3. It is not necessarily about skill development, but about learning the ability to set goals and accomplish them. Instructors need to remember that it karate skills are only a means to an end, and not the end in themselves.


4. It is not necessarily about you. Don't let your ego get in the way. The minute you realize that your job is to be respected through your professional example and not be popular with your students your will be well on your way to a rewarding career as a martial arts instructor.
Posted by SenseiCJ at 3:17 PM No comments:


How we look at the world and approach our daily lives will dictate the quality of our life. When we focus on our ego's and are driven by our fears and desires we are in direct conflict with our Black Belt ideal.
Here is a short list from several sources including Wayne Dyer, Stephen Covey, Spencer Johnson, and the Arbinger Institute.
Remember: "Copying from one source is plagiarism, while copying from many is research!"

1.  Stop being offended.
We all know people who go out of their way to be offended by something and carry a grudge. Don't let people have that kind of control over you.
2.  Let go of your need to win.
Try your best when competing, but understand that winning is a matter of preparation over luck, and the game is won far in advance. Don't be consumed with winning, but with preparing yourself to be your best.

3.  Let go of your need to be right.
Insecure people are those who constantly need to prove themselves. The personalize every argument, and when they are wrong they will refuse to admit it. If you are wrong or have made a mistake, then admit it! This is the mark of a true leader.
4.  Let go of your need to be superior.
Don't be distracted with being better than others, rather concentrate on being better than you used to be. Stay focus on your own growth, remembering that no one is any more important than anyone else.
5.  Let go of your need to have more.
Don't judge your worth on your possessions. You are not the stuff you've accumulated. Remember that it is in the giving of yourself - time, industry or knowledge that gives your life meaning.
6.  Let go of identifying yourself on the basis of your achievements.
Be grateful for the talents and abilities you possess and that they have allowed you to achieve, but understand that the root of your talents is not you but your Creator, and so give credit where credit is due.
7.  Let go of your reputation.
Your reputation is not you, but is located in the minds of others. You have no control of what others think of you, and so stop worrying about it. Make decisions based on your head and heart with scant attention paid to how it looks to others.
Thanks for visiting, I hope you enjoyed our thoughts!

Posted by SenseiCJ at 4:52 PM No comments: